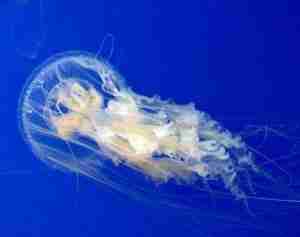 1. Jellyfish first appeared about 650 million years ago and are found in every ocean, from the surface to the deep sea. Some are also found in fresh water

3. Since jellyfish are not actually fish, some people consider the term jellyfish a misnomer, and American public aquariums have popularized use of the terms jellies or sea jellies instead

4.Jellyfish do not have a brain or central nervous system, but rather have a loose network of nerves, located in the epidermis, which is called a “nerve net.”

5.Jellyfish are composed of more than 90% water. Most of their umbrella mass is a gelatinous material (the jelly) called mesoglea, which is surrounded by two layers of cells which forms the umbrella (top surface). The subumbrella (bottom surface) of the body is known as the bell